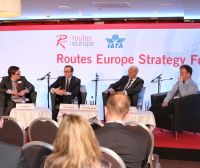 World Routes has become so large that regional offerings are now a popular fixture, this event being the seventh annual Routes, covering opportunities in Europe.  Hosted by Tallinn Airport at the Radisson Blu Hotel Olympia in Estonia's historic capital, the gathering welcomed some 170 airline delegates representing 85 of Europe's leading airlines – a 35% growth in airline delegate numbers from last year's event in Cagliari (Italy).

The keynote address by Mr Siim Kallas, Vice President European Commission, responsible for Transport, highlighted that an efficient, safe and reliable air transport system which links Europe’s regions with each other and the rest of the world is “vital for the broader European economy”.  He stressed it is also just as important for regions to remain connected to Europe’s capitals – “We need airports to allow access to the remoter parts of the European continent, to boost the economies of the communities they serve.  If a regional airport is to survive and thrive, it needs to go beyond the end-destination concept – Connecting flights are essential, enabling the extra flexibility that makes a particular route attractive”, he added. A full ON TOUR will follow next week. www.routesonline.com