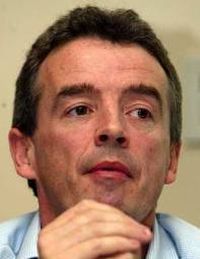 It was good news and bad news for Ryanair last week.  The Dublin based airline announced profits of £406m, a record figure and much in line with expectations.  Speaking on the BBC World Service, prior to the announcement, Business Travel News Editor in Chief Malcolm Ginsberg had predicted a similar number.

Also on the negative side the airline is facing increased pressure to sell its minority 29.8% stake in rival Aer Lingus at a loss after a British court gave the competition regulator the green light to investigate whether the stake is curbing competition.

Britain's Office of Fair Trading last year launched a probe into whether Ryanair's Aer Lingus holding gave it the power to influence the former state carrier's commercial policy and hampered competition.  The Court of Appeal rejected an attempt by Ryanair to challenge this move.  Ryanair said it would appeal the decision to the Supreme Court.  The Stock Market value of Aer Lingus is now half the (general) purchase price. www.ryanair.com