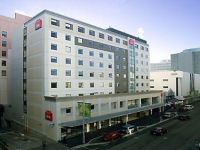 Literally destroyed by an earthquake in February 2011 Christchurch, on the South Island of New Zealand, is gradually rebuilding itself.  At the forefront is the international Accor Group which now says that it will re-open the Hotel Ibis with a target date of September 2012 followed by Novotel Christchurch planned for April 2013.

Decisions on the future of Accor's two All Seasons properties are still pending.

"When we re-open the Ibis and Novotel hotels they will be effectively new hotels", said Regional Manager, Zayne Boon.

"Both of the hotels were relatively new – the Ibis was built in 2007 and the Novotel 2010 – so they were built to very exacting standards and their structures received only minor damage during the earthquakes.  The main problems were internal and required a complete re-fit of both hotels, so when they re-open they will have a very fresh and new feel to them”.

"There is a critical shortage of accommodation in Christchurch and the re-opening of these hotels will allow significant progress to be made in reviving Christchurch's commercial and tourist fortunes.  It will also provide employment and will help support the wider revival of Christchurch's central business district”. www.accorhotels.com