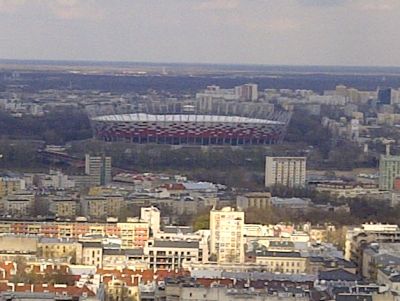 Poland, together with Ukraine will host the UEAFA Euro 2012 soccer competition that runs from 8 June until 1July 2012.

The tournament kicks off at the impressive and brand new 58,000 capacity National Stadium sitting on the on bank of the River Vistula in the Warsaw suburb known as Praga.  Poland v Greece is the opening game.

If you are going to the competition the following will be of interest (however England will play in the mini-league part in the Ukraine and only go to Poland if they finish runners up).  If this is not the case do read on.  Add Warsaw to your list for a mini-break (or business opportunity).  It is a fascinating and welcoming city, with a heart-rending past.  Prices are about half of those associated with London with the Zloty the currency, not the Euro. Public opinion research from March 2011 shows that 60% of Poles are against changing their currency. Warsaw is very walkable, and with 1,000 years of history.

Poland is very accessible from 15 UK airports.  Your Editor flew to Warsaw International by Wizz Air from Luton (twice daily and most pleasant).  This will change shortly to Modlin (see above).  British Airways and LOT provide services from Heathrow.  Frederick Chopin International Airport is 5 miles outside the city and access is provided by bus or taxi.  We stayed at the Metropol Hotel, an excellent 3-star functional property, with in-room courtesy tea and coffee, and free internet access.  Right in the city centre it is a little bit noisy but you soon get used to the hum of the traffic. It’s not expensive. 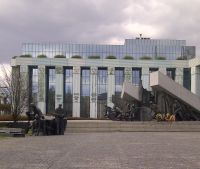 Poland’s relationship with Russia is delicate.  The Warsaw Ghetto uprising of 1943 eliminated the 400,000 Jewish population.  In August 1944 the Poles rose against the Germans with the Russian Army poised to cross the Vistula.  Stalin deliberately held back allowing the flower of Poland’s resistance to be decimated.  The siege lasted 61 days.  In April 2010 a Russian Tu 154 carrying the Polish President crashed on the way to a memorial gathering commemorating the wartime Katyn massacre.  Conspiracy theories still abound.  The Warsaw Uprising Museum provides for a very interesting visit, housed as it is in a former power station.  Do also take in the Ghetto area, a poignant reminder of man’s inhumanity to man.  www.1944.pl 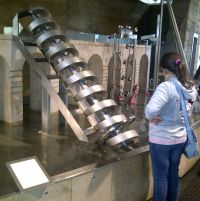 To gain an overall view of the City of Warsaw probably the best place is the University library roof garden, first opened in June 2002 and now well established.  It covers more than 10,000sqm.  The two greatest attractions of the open space – the fish pond and the artificial stone with a small fountain – are connected by the stream with ducks waddling about.  Trees, shrubs, and perennials were found in shades of blue and pinkish-white. The Library plans to plant more trees: oak (Quercus), larch (Larix), spruce (Picea), hornbeam (Carpinus betulus), rowan (Sorbus), and linden (Tilia).  www.roof-garden

Just a short walk away is the Copernicus Science Centre, of which Warsaw should be very proud. If you are taking a child to Poland’s capital it is an absolute must (at least half a day) and even for adults you will learn, your time spent wisely.  It is a newly built (2010) design containing over 450 interactive exhibits that enable visitors to single-handedly carry out experiments and discover the laws of science for themselves, and just across the river from the National Stadium.  The Centre is the largest institution of its type in Poland and one of the most advanced in Europe.  During our visit it was filled with masses of children.  We gather it is a little less busy during the holiday period.  But don’t let the numbers put you off. www.kopernik.org.pl/en 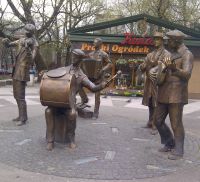 No visit to Warsaw is complete without viewing the Royal Castle, completely re-built in Communist times from 1971 onwards after its utter destruction during WWII.  The castle tour takes you through the magnificently restored property including The Great Assembly Room, The Knights' Hall, The Throne Room, The King's Bedchamber, The Old Audience Chamber, The Canaletto Room, The Small Chapel and The Marble Room.  Since 1995 work has been undertaken on the conservation of the Kubicki Arcades and the reconstruction of the gardens.  Once these works are completed, and the Tin-Roofed Palace refurbished, the rebuilding of the Royal Castle complex will have been completed.  From time to time there are special exhibitions including this summer The Lanckoroñski Collection featuring Rembrandt.

The Old Town is a lovely walk and at night time the bars and restaurants really do come alive.  The cuisine is East European, of good quality and very inexpensive.  At the lively Folk Gospoda a three-course lunch was around £5.  Restaurant "Entropy" in a cozy, atmospheric 19th-century building in Praga which has smoking and non-smoking dining rooms.  If you are into art the City Council is active in promoting inexpensive accommodation for all manner of hand craft workers who are keen to show you (and sell) their impressive output. 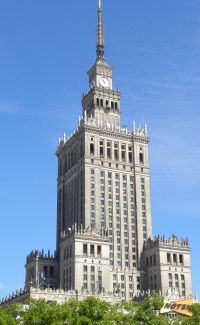 In 48 hours it is just not possible to do justice to one of Europe’s great cities, admittedly not that large with under two million inhabitants.  It must be short of builders as a number of the imaginative schemes programmed to be completed in time for the soccer tournament are incomplete.

If England qualify from their group matches and play in Warsaw the fans will enjoy the city and clearly spread the word of its splendid hospitality. The Tourist Board is one of the best and publishes, gratis, some excellent guides.  Put it in your list of places to visit. www.visitpoland.org