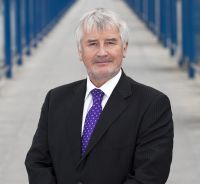 London City Airport (LCY) has welcomed its new Chief Executive Officer, Declan Collier, who joins LCY from the Dublin Airport Authority, where he has been CEO for the past seven years.  Outgoing Chief Executive, Richard Gooding, who has been with the airport since 1996, has become a non-executive Director.

Commenting on his appointment, Mr Collier expressed his belief in the airport’s proposition and its prospects:

“Despite the challenging economic environment, the way forward for London City Airport is clear – we will grow passenger numbers and movements, while continuing to deliver against our passenger proposition of 20 minutes from door to gate.  We are planning for, and investing in the future, and will continue to be the first choice for Business Class passengers flying to European business destinations – while catering for travellers to an increasing range of European leisure destinations.” www.londoncityairport.com