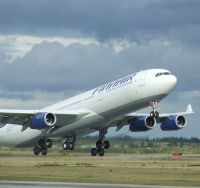 Finnair will introduce a direct route to Chongqing, the largest and fastest-growing city in China, on 9 May.  Such is Chinese politics and sensibilities, journalists from Western Europe (but not the Nordic countries) are being refused entry visas via the city.  This follows the murder of British businessman Neil Haywood.  Finnair is the first airline to open a direct flight route from Europe to Chongqing.

Situated on the edge of the Tibetan plateau, Greater Chongqing has a population of 32m.

“China is a key part of our Europe-Asia strategy.  Western China is an important growth area, and the new route will strengthen our market share in the growing Asian markets.  In addition to Chongqing, Finnair flies to Beijing, Shanghai and to Hong Kong with a total of 26 weekly flights,” said Mika Vehviläinen, President and CEO of Finnair.  Helsinki serves as a hub from many parts of Europe with frequent flights including, from the UK, Heathrow and Manchester.

In addition to Chinese companies many Western businesses, especially in the electronics, automotive and chemical industries, are currently expanding their operations in the city, so business travel is booming.  Also cargo growth prospects are promising due to industrial growth. www.finnair.com