Manchester Airport expects crowds for the 787 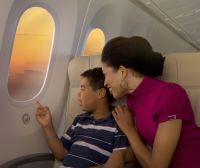 News from Boeing that its 787 Dreamliner is visiting the North West has got Manchester Airport’s Runway Visitor Park bosses busy with thousands of people expected to descend on the facility to witness the historic flight.

The historic day is thanks to Thomson Airways who have jumped in front of British Airways as the first UK customer for the aircraft, and are using the visit as an excuse to give some of its staff an opportunity to get up close to what is the first large commercial plane to be entirely developed this century.

Boeing’s own development aircraft will be make a visit to the region arriving this evening (Monday 23 April) as part of the sixth leg of the Boeing Dream World Tour.  Tomorrow the aircraft will depart for a short demo flight around mid-morning returning at lunchtime.

Andrew Harrison, Chief Operating Officer for the Manchester Airports Group (MAG), said: “The Runway Visitor Park is used to historic flights that attract large crowds.  In 2003, over 25,000 people came to see the final arrival of Concorde and more recently in 2010 when Manchester became the first regional airport to get daily A380 flights, over 10,000 people flocked to the park for its inaugural flight. www.manchesterairport.co.uk