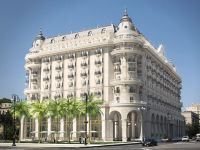 Due to open on 15 June is the Four Seasons Hotel Baku.  The city is the capital of Azerbaijan, as well as the largest metropolis on the Caspian Sea and of the Caucasus region.  The new-build, to classical design, offers 171 guest rooms – including 29 luxury suites – almost all opening onto a balcony.  On the ninth floor is a spa with the pool on the fourth floor of a spectacular atrium which rises to a glass roof in the top of the building.

Ideally located on the Baku waterfront promenade, the hotel will place guests in the city's most sought-after location just steps from Old City and offer strong competition to other internationally recognised brands in the city, including Hilton, Hyatt and Radisson Blu.  In July the JW Marriott Absheron Baku opens. www.fourseasons.com