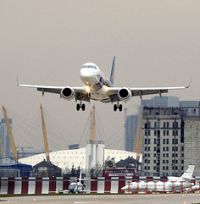 The Isle of Man (Ronaldsway) is to lose its London City route from 10 April leaving the island only connected to the capital via either Gatwick or Luton.

On the positive side British Airways is expanding its aircraft fleet and route network where it is now officially the largest operator with the highest number of routes and customers.  The airline is to take delivery of another Embraer 190 in the late summer, bringing the total fleet size to 14 aircraft.  It will be used for a new year-round service to Venice and to increase frequency to the key business destinations of Frankfurt from March and Glasgow from September.

The new route to Venice, gateway for Northern Italy, will be launched in September and there will be one extra flight a day to Frankfurt and Glasgow.

The news comes as BA is about to start brand new services from the Docklands airport to Mahon in Menorca, Quimper in Brittany and Angers in the Loire Valley in France from May.  The airline now offers a total of 22 destinations in the UK, Europe and the USA. www.londoncityairport.com