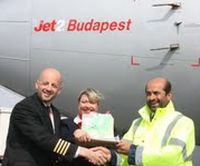 Budapest Airport last week welcomed the first flight of Jet2’s newly inaugurated service from Leeds Bradford (UK) to Hungary’s capital city.  The flight, which landed ahead of schedule, carried a virtually full load with 142 passengers arriving on board the Boeing 737-300.  They were welcomed by representatives from the airport who presented the Jet2 crew with a traditional Hungarian marzipan cake.

The new twice weekly flights from Budapest Airport to Leeds Bradford will depart on Thursdays and Sundays.  This is the third route Jet2 operates from the airport and joins the existing regular flights to Edinburgh, and the daily schedule operating between Budapest and Manchester.  The route, which will operate year round, has been launched following demand from the airline’s customers and follows the on-going success of the existing routes.  It also reflects the airport’s vigorous efforts in replacing business lost with the demise of Malev in February. www.jet2.com