Hilton goes all new at Schiphol 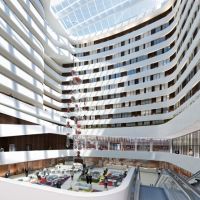 Construction is about to start on a new Hilton at Amsterdam Schiphol Airport.  The hotel will replace the current Hilton property and is expected to open in 2015.

Facilities at the hotel are set to include a ballroom and 23 meeting rooms, speciality restaurant and bar, executive lounge, spa and fitness centre, light-filled atrium lobby and underground parking offering 138 parking spaces.  A sheltered walkway will also connect hotel guests directly to the international airport terminal.

The new Hilton hotel will be situated in a prominent location alongside the access roads to the international airport terminal, near the existing Hilton hotel, which will remain in operation until the opening of the new property and then be demolished.  The new cube-shaped building, which will feature rounded edges and a diamond-shaped façade with diagonal lines, has been designed with a view becoming of an airport landmark.

Hilton Worldwide recently welcomed the sixth hotel to its Dutch portfolio with the opening of DoubleTree by Hilton Amsterdam Central Station.  It also expects to open two new hotels before 2014 with the introduction of the first Waldorf Astoria and Hilton Garden Inn properties to the Netherlands. www.hilton.com