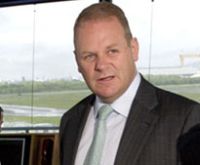 A planning application by George Best Belfast City Airport for a 590m runway extension has been withdrawn by the airport authority.  In a statement on Friday (23 March), the airport's Chief Executive Brian Ambrose said that some of the information in the original plan was "out-dated".

"As the planning process relating to the runway application is now in its fourth year and some of the information contained within is now out-dated given our current operations, we have taken the decision to withdraw the current application.

Our shareholder has therefore reprioritised capital expenditure within its extensive portfolio.

Re-submitting the runway application in the future remains an option as the airport reviews its operations on an on-going basis.”

The cancellation of the present application is seen as a victory by certain local groups and is likely to be welcomed by Belfast International Airport, the longer runway at the George Best seen as a challenge, with numbers at the former Aldergrove now declined by over one million since its record 5.272m in 2007. www.belfastcityairport.com