Madrid gets a new airline 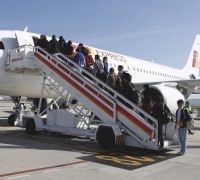 The new unit is designed to restore profitability to short and medium haul routes, operating initially with four A320s on domestic and European routes.  A total of 14 A320s and a staff of 500 people is expected by year’s end.

At the press conference, Iberia CEO Rafael Sánchez-Lozano stressed that Iberia Express “will be a success story that adds value to the Iberia Group.  It will restore profitability to short and medium haul routes, add new destinations and connections, and feed traffic to the long haul network where Iberia is focusing its growth strategy.”

Iberia Express CEO Luis Gallego pointed out that “Iberia Express will have the best of Iberia and new attributes associated with the ‘express’ concept”.  The new airline will be managed independently, but will use Iberia’s maintenance and other services. www.iberiaexpress.com