Airbus presses ahead with Sharklet development 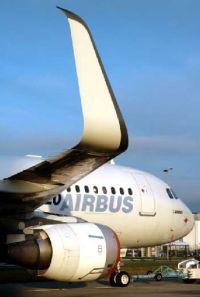 Air New Zealand is expected to become the first customer to take delivery of a Sharklet equipped Airbus A320 by the end of the year.  Trials are currently taking place at the Airbus facility in Toulouse using their own development aircraft retrofitted with the kit.

The device cuts down on aerodynamic drag by helping reduce the spiral-shaped vortices that form at the wingtips of aircraft during flight.  Their introduction on the A320 is expected to result in at least 3.5% less fuel burn over longer sectors – with an annual CO2 reduction of some 700 tonnes.  They also should allow for less thrust to be used during takeoff when runway performance is not “limiting.”  In addition to their environmental benefits, Sharklets will provide aerodynamic improvements resulting in multiple performance advantages for operators.

Air New Zealand is the first customer for Sharklets, which are offered as options on new production A320-series aircraft.  The A320 will be the first model fitted with the devices, to be followed by other A320 Family members beginning in 2013.  Airbus has previously used a less efficient wingtip device and Boeing has fitted what it calls ‘blended winglets’ on the 737 since 2002. www.airbus.com