Olympic worries by the airlines 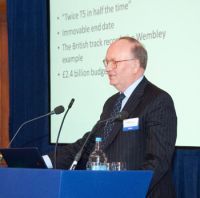 The heads of the UK’s four major airlines have warned the British Government that there could be chaos at London's airports during this summer's Olympic Games, which would cause major embarrassment to the country unless a deal can be reached over their concerns.

In a blunt letter to the Department for Transport, British Airways, bmi, Virgin Atlantic and easyJet said time was running out to tackle the expected surge in air traffic and its impact.

According to the airlines’ bosses, failure to address their concerns could bring misery to millions of travellers including those coming to London for the world's biggest sporting event.

"As the situation currently stands the industry believes that there is a significant risk of severe delay and disruption at all of London's major airports unless urgent action is taken," they wrote in a letter to the Government.  "Time is running out to ensure that any changes to procedures and the appropriate training are in place prior to the Games."

The Civil Aviation Authority told a meeting of airline executives on Thursday that their call for their scheduled flights to be given priority over business jets and smaller aircraft would be difficult to execute and legally questionable. www.caa.co.uk