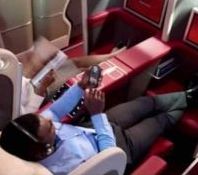 The airline had initially suspended operations at the end of the last summer schedule (2011) but UK authorities facilitated the temporary continuation of the commercial lease of these slots.  This interim solution was only available up until the end of the winter schedule and there has been no further agreement.  The Boeing 737-800 used for the flights will be retained for regional services.  In the meantime British Airways offers a three-class Boeing 777 on the route, which has now gone daily. www.arikair.com