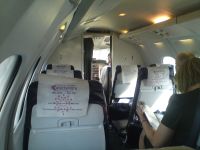 A BAe Jetstream 31 of the virtual airline (an air service booking agency) Manx2.com was involved in an incident on Thursday night (8 March).  It appears that part of the undercarriage collapsed as the aircraft landed following a flight from Leeds Bradford Airport resulting in it skidding off the runway.  There were 12 passengers and two crew members on board the flight.  Nobody was hurt and airport was closed for 50 minutes.

Registered G-CCPW the plane, operated by Links Air, a Humberside Airport licensed air charter company, suffered a problem with the right-hand undercarriage after landing.  The UK Air Accident Investigation Branch is looking into the cause of the accident.  In February 2011 Manx2.com suffered a fatal accident at Cork Airport.  On a positive front the airline plans to introduce daily services from Oxford Airport to both the Isle of Man and Jersey from 8 May.  The airline currently operates 15 routes including the Welsh Assembly backed service between Cardiff and Anglesey. www.linksair.co.uk www.manx2.com