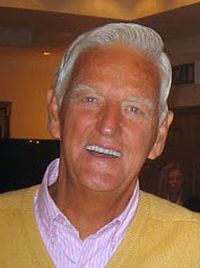 On the day that Continental Airlines died (29 February 2012) Bob Baartz passed on too aged 74.  Bob is credited with inventing sports logo placement, coming up with the idea of putting a big S on Slazenger tennis rackets, an idea which very quickly caught on.  A Newcastle based Oz (work that one out) he was for a long period Mr Continental in the United Kingdom.  Prior to working for the then Houston based outfit he was with British Caledonian, and before that BOAC. He was a great sports fan and a mate of former Australian Test Captain, Richie Benaud. Bob mentored his younger brother Ray in cricket and soccer. He was dismayed when Ray opted to give up cricket to concentrate on soccer – until Ray starred as a Socceroo – a feat Bob greatly admired!  Bob will be greatly missed.