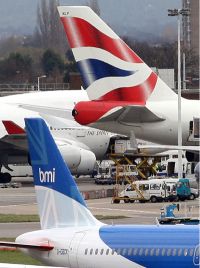 In a classic civil service move the UK's Office of Fair Trading (OFT) has decided not to review BA-owner International Airline Group's (IAG) deal to buy bmi from Lufthansa.  It has passed the decision on to the European Commission.  As already noted by AERBT this will have further repercussions regarding the internal fitment of Heathrow T2, and also Lufthansa’s cash flow.

The Commission has until 16 March to decide, although the deadline may be extended.

Leading the opposition to the deal is Virgin Atlantic which would lose important regional links previously operated by bmi.  It says that passengers could face higher fares and reduced services linking the North West, Scotland and Heathrow if British Airways succeeds in taking over rivals bmi, Virgin Atlantic has claimed.

"The proposed acquisition of bmi by IAG has generated a significant level of concern in the UK, especially in Scotland, the North West of England and Northern Ireland," said Sheldon Mills, OFT Director of Mergers.

"We consider that the transaction should be subject to a careful and detailed review and we will continue to work closely with the European Commission to ensure that UK airline passengers will not lose out through the proposed deal," he added. www.oft.gov.uk