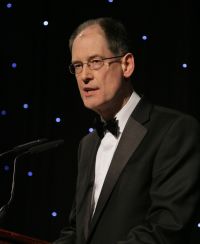 UK Transport Minister Justine Greening was guest of honour at last week's Airport Operators Association (AOA) dinner held at London’s Grosvenor House Hotel in front of a 1,200 assembly.  In her five months in office this was her second AOA appearance, also speaking at the Association's annual conference.  After a fairly unwelcome introduction she seems to have made inroads with the industry members noting she was at Southend Airport earlier in the day and has in recent times visited Birmingham, Gatwick and Stansted airports, viewed as a praiseworthy effort.

AOA Chairman Ed Anderson opened the proceedings.  “Aviation contributes £50bn a year to the UK economy and pays £8bn in tax.  Next month we have a double inflation increase in APD.  Enough damage has been done. There should be no more increases.”

Previously a Treasury Minister, Greening responded.  “I hear what you say about APD and will make sure my Treasury colleagues hear it too.”  "However," she said, “APD has become more important than ever as we pay down the debt.”  No comment on the eagerly awaited aviation consultative document due towards the end of the month either.  “We will call for evidence on maintaining effective UK hub airport connectivity,” she said. www.aoa.org.uk