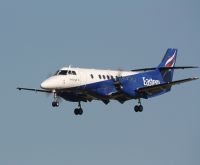 Eastern Airways has stepped in to secure the future of the Southampton – Brussels route which has been dropped by Flybe.

Daily flights (except Saturdays) will be offered by Eastern, as well as the service being fully inclusive.

Eastern Airways previously operated the Southampton – Brussels route for over two years until April 2008 when Flybe had started services on this niche route.

Kay Ryan, Commercial Director, Eastern Airways, said: “The continuation of the Southampton – Brussels route is great news for business and leisure travellers on the south coast of England as there have been strong trade and tourism links between the two regions for many years.  Services will start on 16 April after the Easter holidays.  Business travellers flying on Sundays in time for Monday morning meetings will benefit from later flights, as well as all our customers having fast track security as part of our fully inclusive service.”

Passengers flying with the airline are not charged for check-in, baggage, choice of seat or onboard drinks and snacks.  All passengers have access to the fast track security channel at Southampton, and check-in closes just 30 minutes before the departure time.  A 29-seat pressurised J41 turboprop will be used for the service. www.easternairways.com