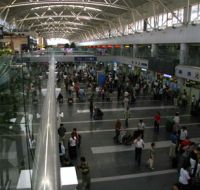 Beijing will begin construction this year of an airport that is likely to replace Atlanta Airport in the United States as the world's busiest, local media has said.  The existing Beijing Capital International Airport (PEK) dates from 1958 although it was extensively re-built for the 2008 Olympics to a design by Norman Foster and Partners.

China Radio International said that the new airport, with nine runways, will handle more than 130m passengers and 5.5m tonnes of cargo annually.

The airport, yet to be named, will cover an area of 2,680 hectares (6,620 acres), the online edition of Beijing Youth Daily said, quoting an unidentified airline executive.

Located in Daxing, 46 km (28 miles) south of Tiananmen Square, Beijing's political centre, construction is due to be completed in October 2017.  What is very clear is that with astonishing growth rates Beijing's two existing airports have reached their maximum handling capacities.  Last year PEK became the world’s number two with a 75m throughput.  It is about 20 miles to the northeast of the city centre.  Beijing Nanyuan Airport, the even older small domestic airport 10 miles south of the city, is expected to close when the new operation is up and running. http://en.bcia.com.cn