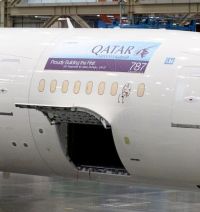 Boeing will build 10 787 Dreamliners per month by the end of 2013, Commercial Aircraft Division boss Jim Albaugh has confirmed, shrugging off industry concerns that a glitch in the fuselage will put the goal out of reach.

Boeing has said that the problem would affect the first 55 787s that were assembled but the issue is now contained and will not be repeated.  The company says that the repair will take 10 to 14 days per aircraft, but will be done concurrently with other work.  Boeing said it has increased the 787 production rate to 3.5 per month.  The company delivered no 787s in February.

The World Tour of the 787 continues with Canada the latest country to see the finished article.  It looks increasingly likely that its European debut (except for ANA’s very quiet Frankfurt introduction) will not be until around the time of the Farnborough Airshow, unless Seattle plans to steal a march on Airbus at Berlin, traditionally a Franco/German homecoming.

To date 873 firm orders for the aircraft have been taken. www.boeing.com/commercial