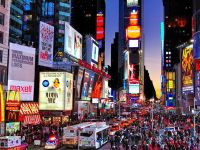 Apple Core Hotels has announced the soft re-launch of Broadway @ Times Square Hotel in New York.  The hotel described as “budget friendly” will be fully operational by July.  The property is actually on 46th Street between Broadway and Sixth Avenue, four blocks north and a five-minute walk.  Apple Core has four other hotels in the midtown Manhattan area.

Broadway @ Times Square Hotel is completely smoke-free and was in fact the first hotel in NYC to claim that distinction.  It offers a host of complimentary facilities including free wi-fi, national phone calls, continental breakfast and free stays for children aged 12 and under.  The ‘media lounge’ is equipped with a business centre, self-service concierge kiosk, flat screen televisions and an informal seating area.  The hotel offers a no charge facility for calls within the US.  All rooms are equipped with an iron, ironing board, coffee and coffee maker, hairdryer, cordless speakerphone with voicemail, as well as Movies on Demand and Nintendo video games.  There are 79 rooms spread over nine floors. www.applecorehotels.co.uk/hotels/broadway-at-times-square-hotel