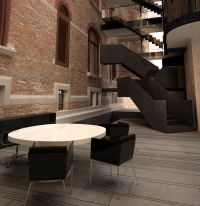 The iconic building that once housed Amsterdam's premier music conservatorium has completed a sophisticated transformation into a most unique and fashionable hotel.  The 129-room Conservatorium Hotel Amsterdam is claimed to combine luxury, lifestyle and heritage with an exceptional level of personalized service.

The property, which is part of the new luxury hotel collection The Set, pays tribute to the Amsterdam Conservatorium’s legacy as soothing classical music selections echo through its vaulted ceilings.

First designed by revered Dutch architect Daniel Knuttel at the turn of the 19th century, the Conservatorium’s well-known structure served as a major bank for 77 years before becoming Amsterdam’s premier music conservatory from 1983-2003.  The original lofty ceilings have been left intact in almost half the rooms and transformed into duplexes with large windows and exposed structural beams.  The courtyard is covered entirely in glass creating a contrast between the old and the new, between the classic and the modern.

Conservatorium Hotel Amsterdam has a prime location in the cultural centre of the Museumplein, next to the Stedelijk Museum, the Van Gogh Museum and the Rijksmuseum.  The hotel is situated opposite the Royal Concertgebouw and parallel to the prestigious shopping district of P.C. Hooftstraat and the famous Vondelpark. www.conservatoriumhotel.com