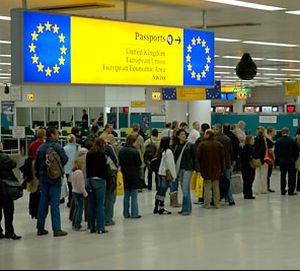 The much criticised (and often delaying) biometric IRIS system of monitoring passports is being quietly withdrawn at British airports.  According to the UK Borders Agency (UKBA) it now only remains for single lanes at each of Heathrow’s terminals.  Not only was the system slow but it was difficult to use by spectacle wearers who had to pass through and push buttons without wearing their glasses.

The IRIS identification system, which has cost the Government £9.1m to date, will be replaced eventually by facial-recognition electronic gates (e-gates) and biometric passports, a spokesman for the agency said last Friday.  The self-service iris-scanning scheme is now closed to people who have not already enrolled in it.

"We are phasing out IRIS and will be replacing it with other types of gates that non-EU passengers will be able to use," the UKBA said in a statement.

With the IRIS scheme, which officially launched in 2006, the agency hoped to speed up border checks for frequent travellers such as business people.  The current scanners will be finally phased out after the 2012 London Olympic Games. www.ukba.homeoffice.gov.uk