IAG Chairman at the LSE 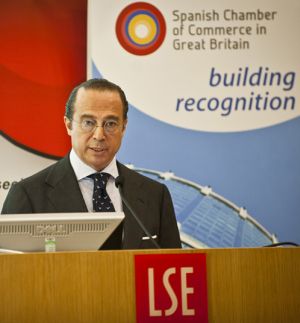 Antonio Vázquez, Spanish Chairman of the International Aviation Group (IAG), made a presentation last week to the Spanish Chamber of Commerce in Great Britain at the London School of Economics (LSE).

He outlined the history of IAG and offered much confidence for the future.  No significant British Airways executives appeared to be in attendance.  Asked by AERBT regarding the new Heathrow – Madrid ‘shuttle’ from T5 he agreed that the Economy Class products were different (Iberia’s ‘Economy’ is much more basic than British Airways) and said that was something they would monitor.  He praised Vueling, 45% owned by Iberia.  A question regarding the possible acquisition of TAP Portugal was fielded by Mr Vázquez with a grin.  “I’ve nothing to say.”  Likewise with the bid to purchase bmi from Lufthansa.  “It is out of our hands,” he said.

Mr Vázquez was critical of progress with the European ’single skies’ development.  “There will be major fuel savings and also in terms of the environment once this is implemented.  Progress is very slow.  Only five countries are putting any emphasis in fulfilling the project”.  With regard to the Iberia Express “low-cost” operation he seemed very confident of its success pointing out it was entirely removed from Iberia, a new set-up with new staff. www.iairgroup.com