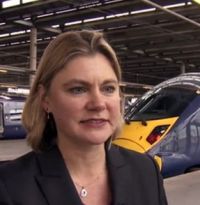 Justine Greening, the new UK Transport Minister was grilled by Andrew Neil on BBC1 Sunday Politics yesterday (5 February), defending his accusation that as an MP representing a constituency on the Heathrow flight path she was somewhat biased.  “All MPs are interested in transport,” she said.  It seemed to be an uncomfortable interview!

Evading a question regarding stated government policy that there would be no new runways in the South East her retort was that Heathrow, Gatwick and Stansted would not be expanded.  As to the Boris Thames Estuary suggestion we will have wait until the Government’s Aviation Review is published on 31 March.

Mr Neil offered some figures regarding flights to China.

At the present time there are 4,639 annual flights from Germany; 2,979 from France and 2245 from the Netherlands.  London lags behind with just 1,579.  She said that Phase 2 of HS2 high-speed railway would eventually include Heathrow, the original plan being dumped.  Ms Greening emphasised that the Heathrow Express will connect up, presumably with an interchange at Paddington.  This of course will mean a stop inbound and outbound for the high speed trains.  Mr Neil did not appear impressed and said that it would not happen in his lifetime. www.dft.gov.uk