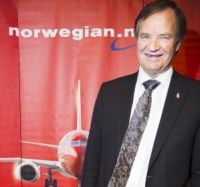 Speculation is rife as to why the North Europe-based carrier requires this large number of aircraft. Its typical leisure destinations are in Southern Europe, Northern Africa and the Middle East, and are served once a day or less.  Norwegian's longest route is from Oslo to Dubai, a distance of 3,200 miles, which is also the second longest scheduled 737 route in the world.

CEO Bjoern Kjos has predicted more airline collapses in Europe this year and said the airline stood ready to plug the gaps.

"I think there will be lots of opportunities in Europe in 2012 because there are too many airlines that have way too old fleets to be profitable with the oil prices of today," said Kjos, a former fighter pilot and mystery novel writer. www.norwegian.no