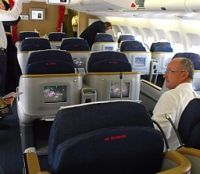 Scandinavian Airlines (SAS) is to re-introduce a Copenhagen – Shanghai service on 2 March, initially on a five times per week service and into Pudong International Airport.  The route will be served by an Airbus A340-300, offering 245 seats in a three-service class set up of Business, Economy Extra and Economy.  Flight time is just over 10 hours.  The airline also operates to Beijing on a daily basis with a similar aircraft, the schedule being one hour less.

Whilst the airline’s main hub is at Copenhagen (Kastrup) in Demark its headquarters are close by Stockholm (Arlanda) in Sweden.  Currently the airline operates 198 aircraft to 176 destinations in more than 30 countries.  It made a working profit in 2010 but took a serious hit, said to be around US$250m, with the collapse of Spanair in which it was a shareholder.

The SAS Group is partially owned by the governments of Sweden, Denmark and Norway, with a 21.4%, 14.3% and 14.3% ownership, respectively.  The remaining 50% are held by private owners with only one (7.6%) significant stake.  The company is listed on the Oslo, Stockholm and Copenhagen Stock Exchanges.

SAS is a founder member of Star Alliance. www.flysas.co.uk