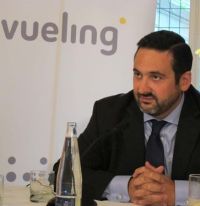 Following Barcelona-based Spanair’s grounding on 28 January, Vueling, also with the Catalonian capital as its headquarters, is set to capture a significant part of the failed carrier’s domestic and European traffic.

Speaking to media in Barcelona, Vueling CEO Alex Cruz announced that the airline will add a total of 33 new frequencies to its existing network including up to 14 daily flights between Madrid and Barcelona, nine to Bilbao and eight to Seville and Palma (Mallorca).

Vueling already flies to 72 destinations in Continental Europe, the British Isles, North Africa and the Middle East.  Initial plans before the Spanair situation called for new routes as of 25 March from Barcelona to Copenhagen and Stockholm, four times per week.  Given the new circumstances, these plans have been brought forward and augmented to the tune of 11 weekly flights to each of these Scandinavian airports, effective immediately.

New routes to Berlin and Hamburg, previously flown by Spanair, will also operate from 25 March.  From Bilbao flights will operate to Tenerife (three times weekly), Las Palmas (twice weekly) and Lanzarote (twice weekly).  Five or more Airbus A320s are likely to be added to the current fleet of 43 aircraft. www.vueling.com