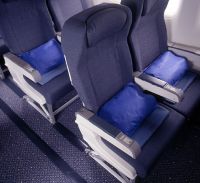 North Atlantic travellers between the United States and Europe flying on United Airlines Boeing 757 services now have the choice of three cabin classes.  The airline has completed a major upgrade project of the former Continental Airlines Boeing 757 fleet introducing an Economy Plus product featuring six inches more legroom.  Some 41 aircraft were involved.

With the reconfiguration, the aircraft have 16 flat-bed seats in BusinessFirst, 45 in Economy Plus and 108 in Economy.  The aircraft principally operate between New York/Newark and Amsterdam, Barcelona, Belfast, Berlin, Birmingham, Copenhagen, Dublin, Edinburgh, Frankfurt, Glasgow, Hamburg, Lisbon, London, Madrid, Manchester, Oslo, Paris, Shannon, Stockholm and Stuttgart, and between Washington/Dulles and Amsterdam and Paris.

Unlike other upgraded economy products (the US airlines have for the most part dropped the ‘coach class’ title), United only offers much more comfortable seating, passengers getting the same meal service and having to pay for wine and alcoholic drinks.

The airline will install satellite-enabled in-flight internet service on its aircraft beginning later in 2012. www.united.com