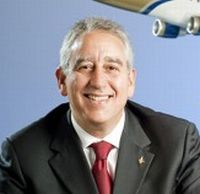 The move is in contrast to Middle East competitors such as Etihad, Qatar Airways and Dubai-based Emirates which have been expanding their networks.

"The downsizing will affect the network and affect the fleet," CEO Samer Majali said. "Staff numbers would not be affected."  The airline could tap Bahrain's sovereign wealth fund Mumtalakat, which has a stake in the carrier.

"This is currently being debated," Majali said when asked if the airline expects to get any assistance from the government or Mumtalakat.

Bahraini newspaper Gulf Daily News reported on Wednesday that the government is considering options including dissolving or shrinking the airline, or selling it and creating a new carrier at a cost of 460 million dinars (US$1.22bn).

Majali said the sale of the carrier or its dissolution was unlikely. "The country needs an airline... they will retain the airline but at an affordable level," he said. www.gulfair.com