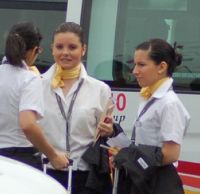 IAG member airline Iberia has sorted out its problems with its flight attendants union, severely disrupting flights.  It has reached an agreement on a two-year extension of employment guarantees and the transformation of some temporary hires into permanent ones, allaying employees' concerns over the impact on their jobs of the new Iberia Express airline unit.

Union representatives praised the accord, which must be submitted to workers' assemblies for ratification this week.

Under the arrangement Iberia will extend its employment guarantees until 31 December 2014, and pledges to extend them for an additional year on condition that a new collective bargaining agreement is signed before the end of 2014.  The employment guarantees apply to permanent cabin staff and to 108 temporary staff who are to be made permanent in 2012.  Previously the airline had announced that Iberia Express would begin operations at the start of the summer season 2012 using four Airbus A320s, with a two-class Business and Economy configuration.  The number of aircraft is due to rise to 13 by the end of 2012. www.iberia.com