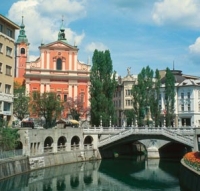 Slovenian national carrier Adria Airways is to re-launch flights to London from 28 March after dropping the route for the winter season.  The airline will offer five flights per week between the capital (and largest city) Ljubljana and Luton operating Airbus A319 equipment. The airline will compete with easyJet from Stansted, who maintained a schedule throughout the winter.

The London route was one of a number of flights dropped by Adria Airways last year after it completed a restructuring of its route network to return to profitability.  Adria has been a Star Alliance member since 2004 and a Lufthansa partner since 1996.  Currently the airline has a 13-strong fleet consisting of three A320 series aircraft and 10 Bombardier CRJ series.

The airline can trace its history back to the 1960s when Ljubljana was part of the former Republic of Yugoslavia.  Established in 1991 Slovenia is today considered the most successful of the Slavic states, a member of the European Union, the Eurozone, the Schengen area, NATO and OECD. www.adria.si