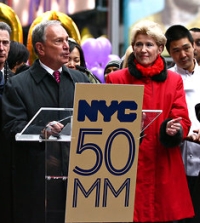 Never a city to do things by half, New York just before Christmas celebrated its 50 millionth visitor with Mayor Bloomberg doing the honours in Times Square.  Keen readers will note that your Editor happened to be in the city that never sleeps at that time.

Responsible for marketing what was the very first capital of the United States NYC & Company have confirmed that the city attracted a record-breaking 10.1m international guests in 2011, a 4% rise over 2010.  The United Kingdom, is the top market of origin for overseas visitors with more than one million holiday travellers – a 2% increase on 2010.  New York City domestic visitors totalled 40.1m, a 2.9% increase over last year.  In monetary terms this represents US$32bn in spending.