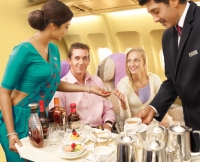 Following the introduction of services to Shanghai, Guangzhou, Kochi and Moscow last year SriLankan Airlines has recommenced twice weekly flights to Zurich.  The Swiss financial capital was served by Sri Lanka's national carrier for a quarter of a century from 1980, but flights were suspended in 2005 during a global slump in air travel.

Under the enthusiastic Chairmanship of Nishantha Wickremasinghe the airline is looking in a positive mood towards the future and further new destinations can be expected.  SriLankan currently serves 61 destinations in 34 countries.  It is the only airline on the Heathrow – Colombo route.

The civil war in Sri Lanka is now history and the country, once one of the world’s great tourist havens, is again aggressively tackling the leisure market.

It was back in 1998 that the airline changed its name from Air Lanka, and in March 2008 did not renew a management contract with Emirates.  Today it operates six A340-300 aircraft, six A330-200/243s and six A320-200s plus a pair of de Havilland Twin Otters under the SriLankan Air Taxi banner which fly from Beira Lake, Columbo, to a variety of water sites around the country.  Colombo is a popular gateway to Male and the Maldives. www.srilankan.com