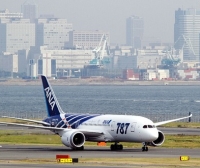 Next Saturday (21 January) ANA, Japan’s largest airline and the launch customer for the Boeing 787 Dreamliner, will introduce the aircraft to Europe with a non-stop 12-hour flight from Tokyo Haneda to Frankfurt.

The success of the Dreamliner, which entered service with ANA on two domestic routes on 1 November last year, is underlined by the very high number of seats being filled on the routes being flown by the aircraft.  Load factors on ANA’s 787 routes to Okayama and Hiroshima have reached approximately 88%, compared to 72.2% for all ANA services operating between Haneda and these two destinations and 67.7% over the same period a year earlier.  The airline has 55 Dreamliner’s on order.

The reliability of the 787 has been as impressive as customer demand with 96.3% of scheduled Dreamliner departures having left on time compared to an ANA group average of 96.5% for the same period. www.ana.co.jp