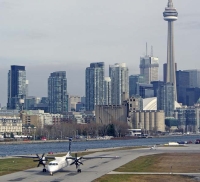 Porter Airlines remarkable growth at Toronto City Airport continues with the announcement of a three times daily service to Washington Dulles starting 16 April.  It will be the Canadian carrier’s sixth US destination.  Block time, that is the time from gate to gate, is just 90 minutes, about 10 minutes quicker than many of the scheduled offerings from Toronto’s Pearson International Airport.  This is due to the fact that aircraft at the downtown airport have very quick runway accessibility, a great saving on time and fuel.

Porter Airlines made its maiden flight in October 2006 and now operates 26 Bombardier Q400 aircraft.  With Washington it will serve 19 airports in Canada and the United States from the airport, which sits on an island in Lake Ontario, and is connected to the mainland by a ferry. It is then five minutes from the city centre.

With the new service the airline points out that it is keen to attract linking traffic both north and southbound.

Subject to financial decisions over the coming months the Toronto Port Authority is pushing ahead with a pedestrian tunnel with construction due to start in winter 2012 and a targeted completion date of spring 2014. www.flyporter.com