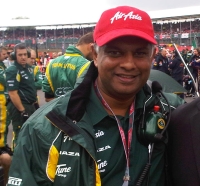 Air Asia X is to pull out of Gatwick at the end of March.  Higher fuel prices, increased APD (Air Passenger Duty) and European emission costs have been put down as the reasons but poor established marketing might have played a role in the route’s demise.  It is a setback for Tony Fernandes whose Air Asia has up to date only seen growth.  He is now also the owner of Queens Park Rangers soccer team, which is in the Premier League relegation zone.  It is the forth failure in recent times of an ex-UK specialist long haul airline.  Air Asia X is also dropping Paris, Delhi and Mumbai.

On the plus side, Gatwick says it has had a very positive 12 months with passenger numbers up 7.3% to 33.6m, whilst short of the record 2007 figure of 35.2m, still is extremely good and going in the right direction.  The airport achieved record average load factors of 76.4%, up 2.9 percentage points on the previous year.

Also very much on the plus side was the completion of another stage in the rebuilding of the North Terminal making it far more ‘user friendly’ from a passenger arrival/departure point of view, landside. www.gatwickairport.com