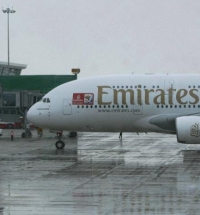 Emirates launched its new daily Dublin route last week.  It competes with Etihad, currently operating a 10 times a week service between its home base of Abu Dhabi – just an hour's drive from Dubai – and Dublin.  Both airlines operate Airbus A330 aircraft, but Emirates is the only carrier offering First Class.  Flight time is around 7hrs 30mins.  The carriers are emphasising connections to Australasia, India and the Far East.

This is the third new route to be added to Emirates route network in the opening days of 2012.  After the launch of Rio de Janeiro (Brazil) and Buenos Aires (Argentina) on 3 January, the Irish capital took its position as Emirates 118th destination from Dubai.

Ireland has a population of around 4.5m.  Around 5,000 Irish nationals live in the UAE and approximately 80,000 in Australia, which is a key market.  More than 70 passengers on the 237-seat inaugural flight came from bookings in Australia.

Along with the new routes to Dublin, Rio and Buenos Aires, Emirates will start flights to Lusaka and Harare on 1 February, Dallas from 2 February, Seattle effective 1 March, and Ho Chi Minh City from 4 June 2012. www.emirates.com  www.etihad.com