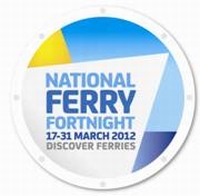 Britain’s annual National Ferry Fortnight has been moved slightly earlier than the traditional May slot (now 17-31 March) to emphasise the great value of family ferry travel at a time when parents have a watchful eye on budgets.  Industry body, the Passenger Shipping Association (PSA), has also revealed a new National Ferry Fortnight official logo that will front the campaign.  With SeaFrance ‘sinking’ last week (see below) the timing of the announcement was unfortunate.

The two-week showcase is designed to heighten consumer and media awareness of Britain’s extensive ferry services of over 50 routes.  Some 35m people, 8m cars and 140,000 coaches were carried by ferries in 2011.

Central to the campaign will be a series of promotional offers on ferry routes to the Continent, Ireland and within the UK.  The National Ferry Fortnight logo will be featured on many ferry members’ own advertising and website campaigns, with a press, PR, and social media push led by the PSA. www.discoverferries.com