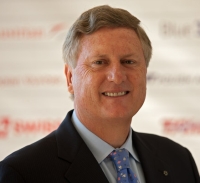 Mark Schwab has been appointed as CEO of Star Alliance based in Frankfurt.  The highly experienced Schwab joins from member United Airlines where he held the position of Senior Vice President Alliances.

"With Mark Schwab we have secured an internationally renowned airline executive, who has all the qualifications required to lead our alliance into the next chapter of its success story," said Rob Fyfe, Chief Executive of Air New Zealand and Chairman of the Star Alliance Executive Board.

Mark Schwab held numerous executive positions in the airline industry at United Airlines, US Airways (launching the London operation) and American Airlines.  He began his aviation career in 1975 with Pan American World Airways in Rio de Janeiro.  As a global citizen he spent most of his career outside his home country, the United States of America.  He is fluent in Portuguese and Spanish and during his stint in Tokyo added some Japanese. www.staralliance.com