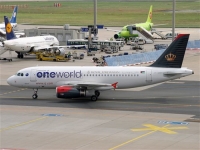 Royal Jordanian, part of oneworld, has launched a new route between Amman and Nairobi.  It operates four times per week with two-class Airbus A319 aircraft.  A full Business Class is provided and personal video screens available for all passengers.

During the first quarter of 2012 Royal Jordanian plans new services to Algiers and Lagos.  The airline says it is also conducting studies to see whether it is feasible to inaugurate operations to Addis Ababa, the capital of Ethiopia and Accra, capital of Ghana, with a view to adding to its route network during the first half of 2012.

RJ President/CEO, Hussein Dabbas, said that the company's effort to inaugurate the route comes in line with the expansion strategy RJ is undertaking in an attempt to find new tourism and travel markets, given the decline in tourism movement from the traditional markets of Europe and North America.

Mr Dabbas said that these five additions to its 59 global destinations constitute a real leap for Royal Jordanian's volume of air transportation.  The step will also support the national efforts that aim at enhancing Jordan's position as a gateway to the Middle East and a hub that connects this region to the whole world. www.rj.com