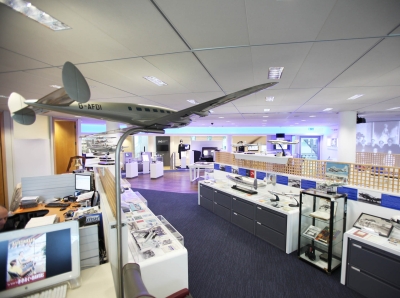 The Speedbird Centre at British Airways Waterside headquarters has reopened after an extensive redevelopment programme.  It is a fascinating collection of memorabilia and archive material reflecting the rich history of the airline since the very first scheduled international flight departed from London to Paris on 25 August 1919 by Aircraft Transport and Travel Ltd (AT&T).  Take a slow stroll past the historic photographs, mostly in black and white, and the model aircraft.  Nearly 100 years of real airline history.  And next year compare the Handley Page Hannibal to the Airbus 380 and Boeing 787. 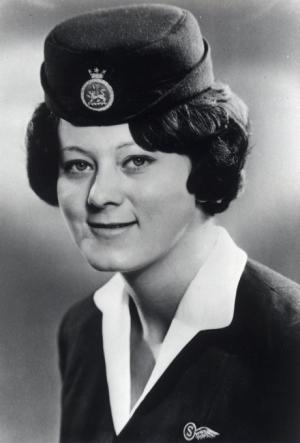 “The collection provides an important reflection of a proud heritage established by the pioneering spirit, the endeavour and the sheer commitment of our people over many decades.

British Airways and its predecessor companies have been at the very forefront of air transport development since the dawn of this industry.  We will continue to lead in the future."

The most important item on view is the George Medal awarded posthumously to Barbara Jane Harrison (born 1945), a BOAC stewardess.  Only three other George Medals have been awarded to women, all of those in wartime.

On 8 April 1968 a BOAC Boeing 707 caught fire on take-off at Heathrow.  Miss Harrison organised the escape of many individuals and was last seen attempting to help some elderly passengers who were less than mobile.  Due to her actions (and of others) only five lives were lost.  An aviation medicine award is given annually in her memory.

The British Airways Heritage Collection has existed since the formation of British Airways.  It was created to preserve the records and artefacts of the main predecessor companies BOAC (British Overseas Airways Corporation), BEA (British European Airways), BSAA (British South American Airways) and the pre-war Imperial Airways.  However those names are only part of the story.  British Caledonian is in the archives as well as Cambrian, Northeast, Go and Brymon and many others, mostly forgotten.

The collection comprises an extensive library recording the formation, development and operations of these companies and British Airways as well as much actual material and documentation.  Amongst many “firsts” Imperial Airways was the first airline to offer in-flight movies. 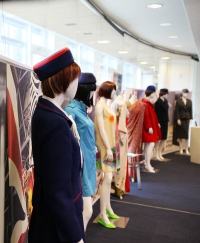 Over 400 uniforms from the 1930s to the present day are preserved, as well as a large collection of aircraft models.

A historically important library of thousands of photographs is also available as well as probably the most complete set of aviation posters in the UK.  The Speedbird Centre houses an extensive range of exclusive advertising posters designed by artists such as Frank Wotton dating back to the 1950s and photographs from the 1920s to the present.  These posters are the work of some outstanding artists, often conjuring up the mood of the time, whether it be art deco 1930s, the austerities of the 1950s, or Concorde.

Paul Jarvis, Manager Speedbird Centre, said: “The collection on display is truly unique.  British Airways has a history and a future that many other airlines aspire to and we are proud to be able to show this to our staff and customers.”

Full tribute must be given to the staff and retiree staff who keep the memories alive.  What it probably needs is real aircraft to go with it.  A BA Concorde still remains at Heathrow and dotted around the UK are Comets, Viscounts, Britannias and even DH Dragon Rapides.  Now is probably not the time to persuade IAG to release redundant land at Heathrow.  But it is something to think about.  Or support for Brooklands which already has Viking, Viscount, Vanguard, VC10, 1-11, and of course Concorde.

It can be done.  Delta has a marvellous museum at its Atlanta Hartsfield headquarters with DC3, Tristar and Boeing 767.  It even has a replica of what was termed “The Delta Air Station” of 1929.  It suffers from the same problem as Waterside in these security conscious days.  It is on airline property and not really accessible to the general public, although in fairness Waterside viewing is available to all, by appointment.

And at Foynes, in Ireland, is the seaplane base once used by Imperial Airways as a refuelling stop on the way to La Guardia New York.  A full size replica Boeing 314 flying boat is displayed outside of a fine museum.  You can sit in the cockpit and try the on-board lounge.

On sale at the Speedbird Centre (and on-line) are photographic prints, poster copies and a selection of memorabilia and model aircraft.