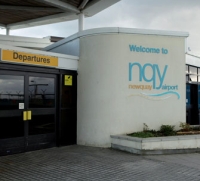 Now the only scheduled service airport west of Exeter, following the closure of Plymouth City Airport in September, passenger numbers at Cornwall Newquay have slumped dramatically.

Cornwall Council has reputably spent £76m transforming the former RAF St Mawgan into the county gateway as a civil airport since 2005.  Passenger numbers rose steadily from 337,000 in 2005 to their peak in 2008 of 431,000.  Estimated figures for 2010 are likely to be less than 200,000.  Airlines have pulled routes, including Ryanair, but the largest loss has been due to the closure of Air Southwest, whose Plymouth transit passengers were a major contributor to the figures.

Airport Managing Director Al Titterington said: “The airport is continuing to work with its airline partners, both existing and new carriers, to grow sustainable air services. Flybe has introduced a new year-round service to Manchester, Loganair will operate services to Glasgow from April and British International Helicopters will operate its helicopter services to the Isles of Scilly from the airport next year. www.newquaycornwallairport.com