Sustainable Aviation at the House of Commons 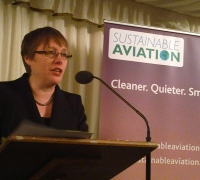 The House of Commons was the venue for the 2011 “Sustainable Aviation” progress report 2011.  The lobby group is supported by most British airlines and is under the umbrella of the Airport Operators Association.  NATS and a whole host of aerospace and aviation companies are also among its supporters.

Maria Eagles, Shadow Transport Secretary, represented the Opposition and gave a fine positive speech saying that the industry had to work across all parliamentary divisions.  The Government was not represented (see above).

The 2011 report runs to 28 pages and deals in a very clear manner with policy, reducing carbon emissions, noise, air quality and waste.  Figures for 2009 show almost a 3% improvement in fuel economy since 2007 and in the same period nearly a 6% reduction in aggregated CO2 emissions.

Featured in the publication is the Rolls-Royce Trent 1000 engine now in service with ANA on the Boeing 787 and due to be introduced by both British Airways and Virgin Atlantic in 2013.  This will be 12% more fuel efficient than the Trent 895 fitted to versions of the 777.  The Airbus 350XWB will have a similar engine. www.sustainableaviation.co.uk