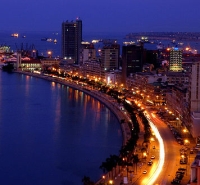 Luanda is the latest destination for Iberia, the route also connecting through Madrid with IAG partner British Airways to Heathrow and a further 100+ points throughout Europe.

The first-ever air link to Luanda from Spain and the UK is expected to enhance trade relations with Angola, whose GDP has grown more than 10% during the last decade.  A one time colony of Portugal, the west African country suffered a civil war from 1975–2002, but has in recent times made tremendous progress.  The population of Luanda is now thought to be in access of 5m.

Iberia has scheduled two weekly frequencies – Mondays and Fridays – between both capitals, using Airbus three-class A340-300s.  Luanda is the airline’s 12th destination in Africa and its shortest long haul route with a flying time of about 7:30hrs. www.iberia.com