IAG Chairman at the Aviation Club 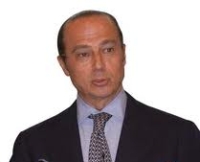 Antonio Vázquez, Spanish Chairman of the International Aviation Group (IAG – essentially British Airways and Iberia), was an impressive speaker at the Aviation Club’s end of year luncheon at the Institute of Directors.

In a far ranging speech, and a plentiful question and answer session, he noted that the combined European airlines will make US$300m this year, a margin of less than 1%.  IAG’s priority is the use of biofuel, and consolidation “there is still a lot to do”, he said, emphasising both.  The Group’s objective is to strengthen its traffic situation between Europe and Asia, especially the critical markets of China, Japan or Korea.  Africa is also a key aim for IAG.  Increasing frequencies and opening new routes between Europe and Africa was a priority.

“IAG already has a global network, especially when we look at how its capacity is distributed: 31% in North America, 22% in Latin America, 18% in Europe, 16% in Africa and 9% in Asia (the remaining 4% is domestic traffic).”

Iberia short term has an all Airbus fleet but in a couple of years’ time he expected a review of the airlines’ aspirations towards 2020.  BA is already organised with A380 and Boeing 787, planned for 2013.  See also Ryan mixes it. www.iairgroup.com