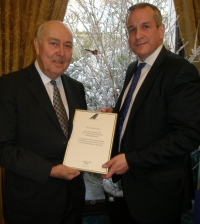 Danny Bernstein, the former Chairman and Managing Director of Monarch Airlines, was presented with the 2011 Aviation Club Fellowship at a luncheon last week.

Nick West, Chairman, said: “As well as holding prominent positions with a number of British airlines, Danny has provided wider industry leadership in a range of significant capacities.  In 1999, he was elected first Chairman of the Airline Group Ltd, the company representing a consortium of UK airlines which became the Government’s strategic partner in NATS.  Danny became President of the International Air Carrier Association (IACA) in 1998; and served as Chairman of the British Air Transport Association (BATA) between 2003 and 2009, as well as becoming the first Chairman of Sustainable Aviation UK and Flying Matters during this period.”

In his short thank you speech Mr Bernstein said that three people had influenced his 37 years in air travel, Mike Keegan, the late founder of British Air Ferries, Fred Newman of Dan Air, and Sergio Mantegazza of Switzerland, a great supporter of Great Britain, and owner of Monarch Airlines. www.aviationclub.org.uk